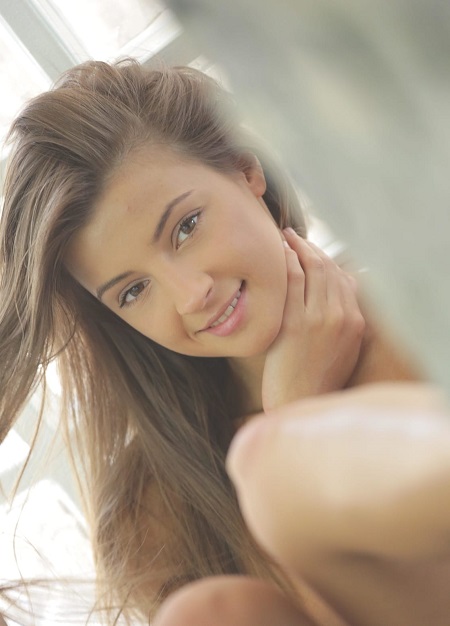 Maria was born in St. Petersburg from a Russian family. She studies economics at school and learns dancing and music school .And immediately reveals herself as a lover of freedom, independence and self determination. This is why she embarks on a career as a model in the adult industry.

She immediately showed particular interest in travel and tourism sciences: she learned english language and she studied on college “Hotel industry and Management and Business Manager at extramural university . Here
first job was housekeer at one of most prestigius and luxury in St. Petersburg.

But since she was an adolescent, her lifelong dream it was to be a fashion model, and at 14 years old she began to study at model agency and performed on the catwalks. Some years Later, she will work as model on Europe model agency.

In a period of strong mass worldwide web age, and internet networks was rapidly expanding in Russia, Maria start performing as a webcam girl as soon as she turned 18 (in 2008 she worked as cam model inside the most important International adult camsites.

Thanks to her natural beauty and innocent next-door look, and her crazy, funny and unusual performances on cam, in few time many free-hosting sites (as PornHub.com) started to share her recorded webcam videos and she became very popular on internet.

For this reason, many freelance photographers and videomakers in St. Petersburg start to invite Maria and involved her as nude model in some castings, and fetish no-nude photoshoots. Mostly, in her professional activity she performed as Nude Model softcore solo model, but also in few G/G movies softcore and taked part in massage videos , activity this is known by her fans as her period in “midcore” genre.

During her career, Maria has worked too as a fashion model with some brands, making commercials advertising; she has worked also with many fine art photographers, posing for nude art and glamour pictures.

Moreover, she posed in some fashion and adult magazines as well: she was featured in Maxim Magazine (she was fronpage girl on the cover of Czech edition of May, 2015), Union Magazine (France, July 2015) Penthouse Magazine (Pet Of the Day, August 2015-September 2015) and film Playboy Plus (2018).She also has worked posing for Playboy Plus: first time in 2018, and most recently with her real name Maria Ryabushkina on new issue May 2019,called “All Eyes On Me”.

She have also her own official website, www.melenamariarya.com, opened since 2016.